A downloadable mod for Windows

The beta releases are meant to get this mod out the door sooner! However there's sure to be bugs, and probably bugs in the base game that I didn't catch. Before commenting about a crash, please check the known issues section for more information!

Requirements:
You'll need to install VC++2019 Redist before playing, if you have Windows 10 you should be good, but just in case you can check here:
https://support.microsoft.com/en-us/help/2977003/the-latest-supported-visual-c-d...

Install Instructions:
- Extract all files to your NOLF 2 directory
- Run NOLF2.exe
- Select "Custom"
- Make sure "Modernizer" is the only item checked
- Run the game and enjoy!

Known Issues:
The following might not be fixable:
- Anti-aliasing causes a ~1 pixel offset at the edges of 2d elements
- Jukebox Singles take a full second to load
- Due to how the input system was re-written, all controls are now saved in controls.cfg. This doesn't work with the base game so it's not compatiable with any other mods!

The following can be fixed in a future patch:
- Cate's missing from the main menu, we don't know where she went!
- Jukebox can occasionally crash while switching songs
- Jukebox songs are sorted in alphabetical order
- Some Jukebox Singles have duplicate songs
- Some cutscenes (with 4:3 mode disabled) contain overlays that don't have black bars
- Controller support is only supported during gameplay, it doesn't work on menus
- Crosshair can be off-centered when switching to specific resolutions. A restart will fix this
- Switching to a lower resolution from a fullscreen windowed mode can make the window get stuck in borderless mode
- Almost certainly there's a multiplayer browser crash in there somewhere!
- Music can sometimes be a little jumpy (I've been told the base game had this issue too, but I'm looking into it!)
- Dedicated Server doesn't work (A new version will be released in a future release)

Controller Code Labels:
Below is a list of controller codes and what they are on the controller.
this is based off of the basic Xbox 360/One controller. However a PS4 or other controller should work fine!

Custom Controller Mappings:
The new input system was written to take advantage of SDL2's game controller api. This enables non-xinput devices to work as if they were xinput devices. If your controller won't work you could try community bindings located [here](https://github.com/gabomdq/SDL_GameControllerDB/).
Simply drop the `gamecontrollerdb.txt` file into your NOLF 2 game folder and Modernizer will attempt to load it on start-up.

Special Thanks:
- My Partner - For putting up with quite a few late nights
- Nathan Grigg & Monolith Mark - For getting me some wonderful song title suggestions
- SPAWN - For his immense help with testing & organizing the multiplayer community (Check out his site https://www.spawnsite.net)
- Everyone at LithFAQ - Because they're all such a helpful bunch
- <Space Intentionally Left Blank> - To whoever actually brings NOLF back from legal hell
- And You - For enjoying such a fantastic forgotten gem

Backup your existing NOLF 2 installation!! You'll have to restore the original install if you want to play without this mod enabled.

- Extract all files to your NOLF 2 directory
- Run NOLF2.exe
- Select "Custom"
- Make sure "Modernizer" is the only item checked
- Run the game and enjoy!

Thank you SO much for your work on this HeyThereCoffeee. I appreciate the work you've done for NOLF 1 and now NOLF 2. I hope you may consider Contract J.A.C.K. in the future as well! I am looking forward to the dedicated server in a future release. It is great to see the multiplayer menus and MOTD working again :) There are some great mods out there that have worked to get multiplayer working again, but what we really need is what you're doing - an all in one fix to support 2020 resolutions and operating systems, along with fixing the random crashes and multiplayer functionality. Will be waiting for more of your work!

Ya good job, HeyThereCoffeee. Crim, how do we get on to play multiplayer colafactory, now? I 4get--been a while...I rem we used to join via lan and tweak it. I keep getting that ws error when searching internet servers. Is it this info from 2016? https://community.pcgamingwiki.com/files/file/701-no-one-lives-forever-2-multipl...

Well the dedicated server doesn't appear to be ready yet for this mod, but excited to see how it progresses. For now, I think the listen server (i.e. host is in-game) should work over Internet now as long as ports forwarded/firewall unblocked.  May preclude being able to alter runspeed/respawn scale (although it has a console now with the tidle ~ key, have to experiment with that)!

Yeah listen servers should work. There's no port punch through, so like you said criminalcola (good name btw), otterr (and others) have to open the ports!

I need to do some further work to stabilize things a bit. I had to re-write the entire server browser back-end (and adjust my basic gamespy emulator) for NOLF 2 (For nolf1 I was able to just hex edit the server address, there were a lot more dependencies in NOLF 2 that made that impossible.)

If you're interested in multiplayer make sure to check out https://www.spawnsite.net and their discord. They host weekly multiplayer matches on weekends. (For NOLF1, probably NOLF2 as well if you ask!)

you mean the port, where it says 27888 or whatever? I rem doing something like that b 4, right Crim?

yeah it would be one of the default ports to unblock/forward in the router or gateway! :D

I wish there's any way to play the game with our save. To max out the Cate's upgrades and stuff... Start from zero always annoyed me on this game. Especially when we can do that on the first one.

Found a visual bug with using scopes when playing at 21:9

Thanks for the report. There's probably a few other things that are broken on 21:9, but I'll be sure to look into them for the next update!

If you spot anymore oddities feel free to post them here! (I have to emulate this resolution in order to test it, so it wasn't exactly extensive.)

Had a lot of trouble running NOLF2, especially the mouse input, it was so broken, with this it runs perfectly.

No problems so far, hope you keep working on this and keeping this forgotten series alive. Thank you for your work.

How I hope Nightdive or someone else manages to re-release the games digitally.

About a year ago I released the first version of NOLF 1 Modernizer, and soon after started work on NOLF 2 Modernizer! While it did take a while (this year has been wild after all!) it's finally here.

This release is slightly less polished than I expected, but I could easily spend the next few months fixing things up. So in the end I decided to ship out a beta build. It will probably crash in unexpected ways, and it miiiight only work for the English version of the game. But, at least you folks can start poking away at an amazing game!

Feel free to post any issues you discover, I did create a known issues section covering some things I haven't fully fixed up, but I'm sure there's more. 😎

Thanks for your patch!

Nolf2 has several fatal bugs:
1. Error "MFC Application error"
2. Distortion of graphics and "brakes" on some missions, for example "Siberia"
3. The game freezes on some episodes, for example, with a mime on a bike.
Does your patch solve any of these problems?

I haven't encountered any of those issues. With regards to the mime on a bike mission, there was a problem with framerates higher than 60, this mod caps it to 60, so you'll be able to progress that section.

I haven't seen any distortion of graphics, aside from part of Antarctica that I couldn't replicate after the fact.

The MFC application error is just a generic crash, so it's hard to track down. If you encounter it feel free to upload your debug.log, and specify what happened and I can try to take a look! 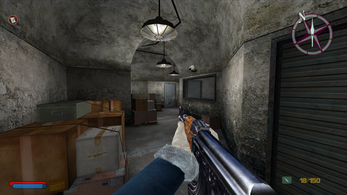 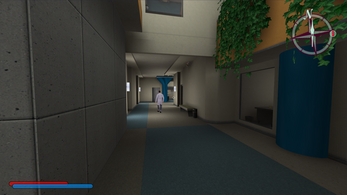 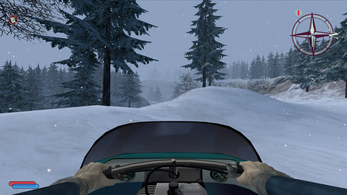 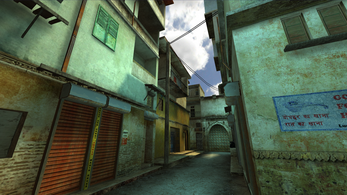 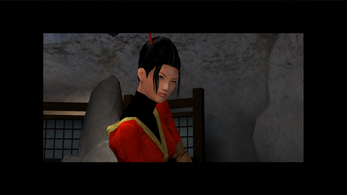 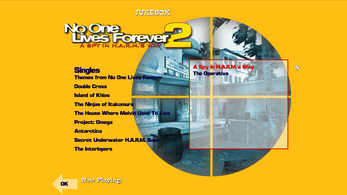 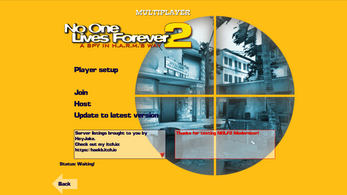